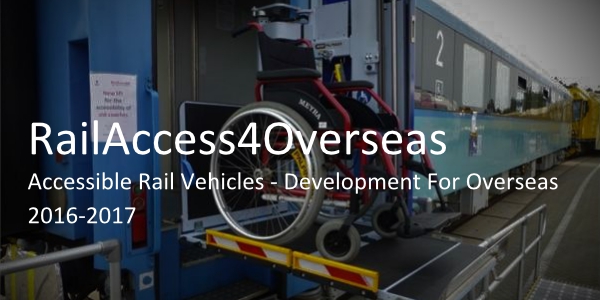 The aim of the RailAccess4Overseas project was to prepare a feasibility study for retrofitting a wheelchair lift into existing Canadian rail vehicles and to develop specific requirements and implementation plans for the development and installation of such lifts.

Project description: All people, regardless of any physical or psychological limitations must be able to participate equally in social life including mobility. This access is not only an ethical requirement but also laid down by law both in Europe and in many other parts of the world. In rail transport there are numerous access barriers for persons with reduced mobility, which are reduced by various measures to such an extent that it is possible for all persons to use the railway system independently of any restrictions. Wheelchair users who need technical equipment such as ramps or lifts to get on board a train from the platform pose a particular challenge when boarding coaches. In this respect, railway operators prefer systems installed in the vehicle for operational and economic reasons. With classic coaches, ramps are no longer possible due to the difference in height, which means that only lifts are used.

Compared to other means of transport, rail vehicles have a long service life during which they are overhauled several times and adapted to the current state of the art. Experience has shown that especially when retrofitting lifts in existing vehicles, both specific adaptations to lifts and in some cases, extensive conversion measures to the vehicles are necessary. However, the associated costs are sometimes so high that the retrofit of rail vehicles with lifting devices is not done and these are then not barrier-free and in particular exclude wheelchair users from using the train.

In Canada, under pressure from the Canadian Ministry of Transport, railway operator VIA-Rail is currently showing interest in retrofitting their vehicles with wheelchair lifts. Preliminary investigations have shown that no conventional lift systems can be installed in their vehicles without expected extensive expenditure, which is why despite interest and political pressure no improvements can currently be expected for wheelchair users of the Canadian railway. The aim of the RailAccess4Overseas project was to investigate the feasibility of retrospective and future implementation of lift systems in vehicles in North America, particularly in Canada, and to lay the foundations for the efficient development of lift systems for this specific market through cooperation between Austrian experts and world market leaders in the field of accessibility in railways and in particular with regard to lifts for rail vehicles.

Due to the many unknown challenges and the difficult to assess chances of implementation with regard to retrofitting lifts in North American, in particular Canadian passenger coaches, the development has a high risk factor. Conversely, entering the Canadian market represents a great opportunity for Austrian companies in this special field of activity. As a first step, RailAccess4Overseas was to clarify the concrete feasibility with regard to the technical development and implementability of lifts for Renaissance Car and LRC Car vehicles and to clarify concrete further market potentials and define development steps. The exploratory project is a major step towards clearly limiting the major risks prior to implementation and offering Austrian companies the opportunity to gain a foothold in the Canadian market in the area of accessibility. The Canadian railway operators and ultimately the affected customers are offered the added value that after future development and implementation wheelchair accessibility to the railway system will be made possible.