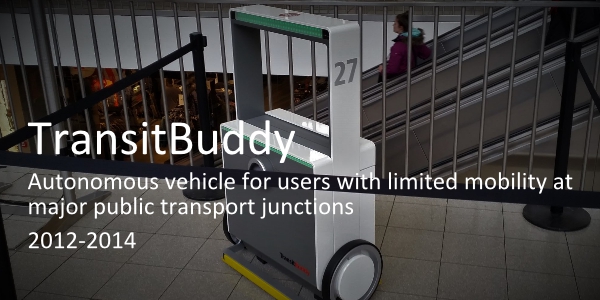 TransitBuddy’s aim was to develop a luggage-handling system for railway stations consisting of autonomous vehicles that not only carry luggage but also provide an orientation aid.

Project description: The TransitBuddy project investigated the technical, organisational and user-oriented aspects of the use of autonomous vehicles to support different groups of passengers at major public transport junctions. To this end, the requirements and needs of different user groups were first ascertained by means of a written survey and within the framework of focus groups. As a result of this study of user requirements, a catalogue of requirements was available containing the essential specifications for the research work planned for the further course of the project.

In the first step towards the development of design studies for the TransitBuddy, preliminary concepts were developed and parts thereof were tested with potential users in two field trials. The results of these field tests have already provided the first important insights into user interaction with individual design components and the test setup as a whole. In addition, different chassis variants were evaluated and the most promising types of chassis for the TransitBuddy were determined. In the first design phase, three different design concepts were proposed, which ultimately resulted in a solution approach for an overall concept. In the detailed development of the design study, an intuitive and self-explanatory system was developed, which as an autonomous actor in public space supports users in transporting luggage.

For the field tests with test subjects, a semi-autonomous vehicle with body was built, which can map a space using a laser sensor and approach freely selected points autonomously without colliding with static and dynamic obstacles. Newly developed algorithms for automatic path planning can take into account both local dynamics (e.g. reaction to unexpected obstacles) and global planning (e.g. route calculation on a learned map). In addition, an algorithm has been implemented that enables the vehicle to detect and track the feet of people using a laser scanner.

The final evaluation assessed the progress made and compared it with the requirements identified at the start of the project. For this purpose, the design approach was implemented as a mock-up true to design up to the representation of various functions and the various TransitBuddy use cases were visually presented in an animation. The design concept was finally evaluated through surveys at Westbahnhof (quantitative surveys) and in the context of two focus groups (qualitative surveys).